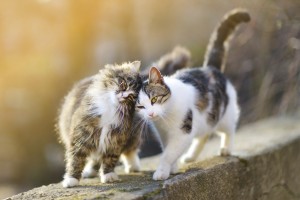 We don’t really put much thought into the fact that most of our dogs and cats are spayed; however surgery is a big deal, no matter who you are.

The traditional spay involves a full abdominal incision in which the uterus and ovaries are removed. It may be a routine surgery, but that doesn’t make it an easy one. In fact, if a human had this type of surgery performed, we would likely be feeling pretty sorry for ourselves for a few weeks at least.

Clairmont Animal Hospital prides ourselves on putting our pet patients first. That is why we offer and encourage our female patients to undergo a laparoscopic spay surgery rather than a traditional spay procedure. Why you might ask? Read on to see if you are convinced.

There are many reasons that spaying pets is the right choice for many animals. Besides the risk of unwanted litters and the inconvenience of dealing with a pet in heat, spaying animals does provide health benefits to our patients.

Spaying your dog or cat has been shown to:

Benefits of the Laparoscopic Spay

You are probably familiar with minimally invasive surgery or laparoscopy from the human medical world. Laparoscopic procedures involve the creation of one or more small holes created as a window into the body. Through these holes, a laparoscopic camera and various instruments are introduced in order to accomplish a task.

This technology has been around for quite some time, and we in the veterinary field are beginning to embrace it more and more. The benefits to a laparoscopic spay are numerous as compared to a traditional one. Major upsides include:

We know that people who have had similar abdominal procedures report that they are quite painful. Because animals are so good at hiding pain, we probably do not fully recognize their discomfort. They also probably return to normal activity long before they should.

Using laparoscopy can help with some of these issues. A 2005 study in the Journal of the American Veterinary Medical Association showed that dogs who underwent a laparoscopic spay had lesser need for pain medication and acted more normally after surgery.

Laparoscopic techniques allow us to efficiently and effectively perform procedures with less risk and pain to your pet. What’s not to like?